Scorpions are a pest that most people in Houston want nothing to do with. Unfortunately, the climate Houston provides makes it the perfect breeding ground for them, so if you’re a resident in the area, it’s a good idea to learn some information about scorpions and their behavior so that you can better protect yourself from them. 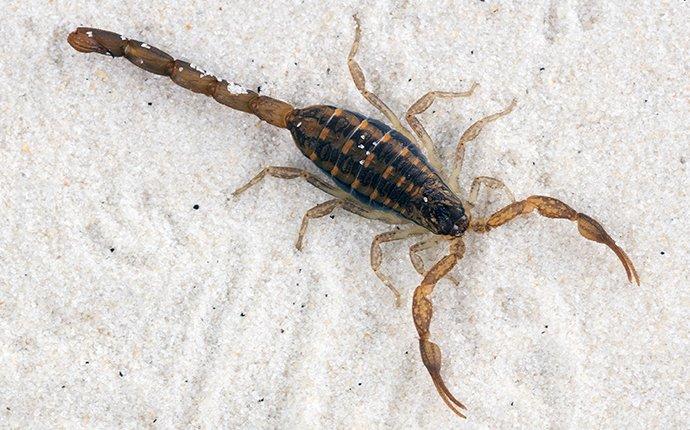 In Texas, scorpions can be a problematic and painful pest. In order to help prevent you from getting stung, the professionals at Romney Pest Control have gathered answers to our customers’ most common questions about scorpions. Whether you’ve already seen scorpions in your home or just want to prevent them from getting inside in the future, Romney Pest Control is here to help.

Scorpions are a type of arachnid characterized by four pairs of legs, large pincers, and a long tail with a sharp stinger at the end. There are over 1,000 types of scorpion around the world and at least 20 different species in Texas.

Scorpion species range considerably in size and color, but in Houston, the most common type of scorpion is the striped bark scorpion. Striped bark scorpions grow to about 1 ½ inches long and are yellowish-brown in coloration, allowing them to blend in well with the sand and dust that makes up much of Texas.

Where do scorpions live?

Scorpions live in dry, warm climates. They’re found in deserts around the world and are common across the Southern United States. Scorpions try to avoid spending much time in the open, so in the wild, they are most commonly found hiding under rocks, inside logs, in woodpiles, or burrowed underground.

During especially hot weather, scorpions may get into homes looking for shade and a place to cool off. They will likely try to hide in storage areas, under boxes and furniture, and even in bedding.

What do scorpions eat?

Scorpions are carnivores and have a wide diet. In the wild, they typically eat other pests such as spiders, crickets, worms, and cockroaches. However, scorpions can survive for months without food if necessary.

How venomous is a scorpion?

Most scorpion stings in the United States aren’t fatal or particularly dangerous. There is one species, the Arizona bark scorpion, that can be quite dangerous, but the striped bark scorpion’s venom isn’t dangerous to most humans. However, even if it’s not life-threatening, a scorpion sting will still be painful. It can rival the sting of a wasp and may result in redness, swelling, and pain for a few days.

Though people often refer to “scorpion bites” in the same way they talk about ant or spider bites, these arachnids actually sting rather than bite. While they can also attack with their sharp pincers, they most often use them to hold prey down instead, using their stinger as their primary method of attack.

A scorpion sting may result in a red mark where you were stung. The area around the sting may also become red and swollen, and the sting can be painful for several days. If you develop any severe symptoms, you should seek medical care immediately.

What should you do if you encounter a scorpion?

Scorpions aren’t usually aggressive and generally only sting if they are surprised or feel threatened. If you see a scorpion, stay calm. Don’t make any sudden movements. Regardless of if you decide to kill the scorpion, try to move it outside, or leave it alone, we recommend following up with professionals so that we can help you determine whether or not you have an infestation and eliminate any scorpion problems you may have.

How can I avoid scorpions?

The best way to prevent scorpions is to take away their hiding places. Clear debris from your yard, store firewood far from the house, and always inspect items before bringing them inside. You should also clean indoor storage areas like basements and closets to minimize hiding places.

What’s the safest way to keep scorpions away?

The best guarantee that you won’t run into a scorpion on your way to the bathroom one night is to get ongoing pest services from Romney Pest Control. We can help you minimize harborage points, reduce entry points, and limit attracting factors. Our services will provide long-lasting relief from scorpions and other pests. There’s no reason to be afraid of what pests lurk around your home at night. Let Romney Pest Control solve your scorpion problem!