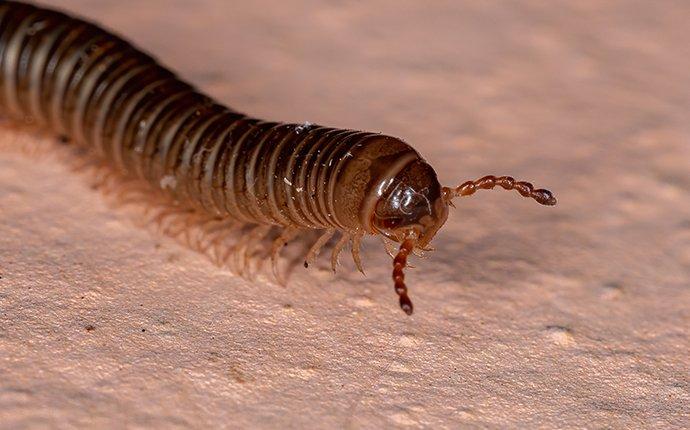 Centipedes and millipedes are superficially similar, but if you look closely, you will see many differences between them.

Centipedes can pinch your skin and inject venom when handled. This venom is generally not dangerous to people and comparable to bee stings in irritation, but if you are allergic to bees, wasps, or other insects, you could be allergic to centipede venom.

Life Cycle of Centipedes and Millipedes

Centipedes and millipedes have relatively long lifespans compared to other bugs; the former can live up to six years, and the latter can live up to ten. Centipedes prefer moist, protected areas to live such as under logs, stone, bark, and leaves. This is where they lay their eggs and cover them with a sticky substance. The few centipedes that give birth to live young do so here, too, and usually do so during warmer months.

The house centipede (Scutigera Coleoptera) lives in moist, dark places in your house, and is about 1 ½ inches long. This is the only species of centipede that can reproduce in your house.

Millipedes typically don’t reproduce until they are about two to five years old. They live in compost, leaves, and mulch, and lay their eggs through springtime, eggs which take several weeks to hatch. Millipedes are scavengers, eating decaying matter such as leaves and mulch, and a few species eat insects.

Why are Centipedes and Millipedes in My House?

How Do I Get Rid of Centipedes and Millipedes?

There are two steps to getting rid of centipedes and millipedes. The first step is to spray an insecticide around baseboards, pipes, windows, and doors. Be sure the pesticide you choose has centipedes and millipedes listed as something the pesticide kills and follow the label directions carefully; the last thing you want is to accidentally poison you and your loved ones.

The second step is turning your house into a no-go area for centipedes and millipedes.  Spread a band of gravel from your foundation to any flower beds near the house to make it difficult for the pests to get inside. Move firewood and any other items away from the foundation, seal all access points, make sure the window screens have no gaps or holes in them, and check the weatherstripping under your doors too. Spray pesticides around the base of the house outside to kill these pests before they attempt to come in.

Getting rid of all the centipedes and millipedes in your house can be hard, especially migrating millipedes, but doesn’t have to be this hard. Romney Pest Control can help. They offer a free quote, too; their technicians will inspect the house inside and out before giving you a full report on what they find.

Let their experts handle spraying and sealing your house so millipedes and centipedes can’t get in. Contact Romney Pest Control at (210) 446-5267 today and get rid of your pests.