The Secret To Keeping Wasps Out Of Your Houston Yard 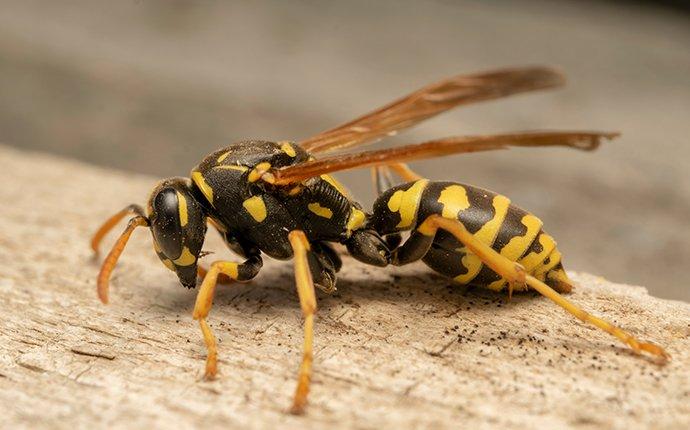 There are many species of wasps. Several are known for being particularly aggressive or dangerous. Paper wasps have a reputation for being tamer in comparison. Experts often focus on how wasps sustain the balance of the environment by eating other bugs and pollinating. However, that doesn’t mean don't come with some risks. Find out about the threats paper wasps pose, and how you can keep them away with Romney Pest Control’s help.

How Do You Identify Paper Wasps? What Are The Risks?

Paper wasps are about an inch long, give or take. They have yellow markings on their dark brown bodies and black wings. Their coloring is why they’re often mistaken for yellow jackets, but they’re longer and more slender than yellow jackets. Shielded spots are ideal for paper wasp nests. You’ll likely see them swarming around the following:

Catching paper wasps in these locations is the greatest sign of infestation. They get indoors through cracks in foundations, or open doors and windows. The appearance of their nests is what inspires their name. They use their saliva to patch plant material together; it looks paper-like when it dries and hardens. The final texture is so dense that seeing the inside pockets is nearly impossible. Shape-wise, these nests resemble an umbrella. This has led some insect enthusiasts to call them “umbrella wasps.”

Though paper wasps will only attack and sting when they feel threatened, there’s no telling how or when that will occur. It’s wise to just not bother them, and stay out of their way. If they sting you, you can anticipate great pain. Allergic reactions to their venom range from slight to severe. Medical attention may be necessary, especially since they are able to strike repeatedly as much as several times per seconds.

How Do You Prevent Paper Wasps?

Three things can make your property attractive to paper wasps: organic matter, living things, and food. These critters surround yards and gardens, eager to consume plants, pollen, nectar, and fellow bugs. Your garbage will be a target too, as they will see access to it as a food source. Thus, key preventive methods for paper wasps include cleaning up, taking care of your lawn, and hiring pest control. Tips include:

What Can Romney Pest Control Do About Paper Wasps?

As mentioned earlier, you don’t want to disturb paper wasps or try to remove their nests on your own. Take the safer route, and contact Romney Pest Control. We only use equipment and products that are top-of-the-line. We want those stinging insects off your property as much as you do. We can strategically disable nests, apply a treatment to kill active wasps, and ensure new wasps won’t arrive.

We’ve been in business for over a decade, and offer trusted, professional care. We have multiple, successive Angie’s List awards to prove it! Romney Pest Control is also an accredited and highly rated Better Business Bureau establishment. Call today and get a quote!