Home › Blog › What You Should Know About Mud Daubers In Dallas

What You Should Know About Mud Daubers In Dallas

Dallas residents experience different wasp populations throughout the year, but a lesser-known wasp species is the mud dauber. Many Dallas homeowners haven’t heard of mud daubers, so when they see a mud dauber on their property, they’re rightfully concerned about whether this insect is dangerous or not. 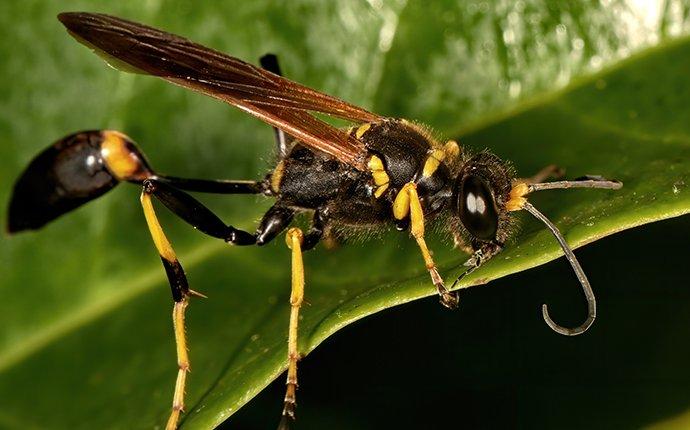 Fortunately, mud daubers are a docile wasp species, and if you identify one on your Dallas property, you shouldn’t be concerned. Nonetheless, mud daubers can flock to certain households in high numbers, so let’s discuss what these wasps look like and how to prevent them from taking over your yard.

Mud daubers in Dallas, sometimes called dirt daubers, are undeniably wasp-like. These insects share many characteristics with other wasps: they have long, sectioned bodies that are black and white, with six bent legs, two mid-length antennae, and a set of body-length wings.

Compared to other wasps, mud daubers are pretty easy to recognize. The most defining feature is the mud dauber’s pinched waist. A narrow, tube-shaped waist connects the wasp’s body to its stinging abdomen, making the wasp look more elongated. Additionally, you can identify mud daubers based on their reddish-brown wings, which stand out against their black-and-white bodies.

The other reason mud daubers are so distinct is that they are solitary insects. Unlike most wasps which work together to build nests, mud daubers live on their own and create single-home nests with mud. If you spot a wasp hovering around a long, urn-shaped mud-nest, it is most definitely a mud dauber.

Compared to other wasps, mud daubers are docile. These wasps are not aggressive and will only sting if they feel threatened. Often, they will rebuild their nest somewhere else if it gets damaged or removed, further demonstrating their lack of aggression. If you have an allergy to wasp stings, you should stay away from mud daubers, but you don’t need to worry about being attacked by one.

Mud daubers are actually beneficial for Dallas property owners. These insects feed spiders to their larvae, and by controlling spider populations, Dallas residents can worry less about possible spider bites.

The only time mud daubers cause problems is when too many of them start crowding around your house. Even knowing that mud daubers aren’t dangerous, many people feel uncomfortable surrounded by wasps, and if you have a wasp sting allergy, you definitely don’t want mud daubers too close. Mud dauber infestations are rare, but they do happen. When their population gets out of control, consider the following:

If a mud dauber infestation happens on your property, don’t try to control it on your own or remove the nest. Aggressive or not, you’re putting yourself in the way of a stinging insect. Rather, contact the pest professionals at Romney Pest Control, and we’ll protect you and your household from these solitary pests. Give us a call today to get started.